This site uses cookies. By continuing to browse the site you are agreeing to our use of cookies.

Our website uses cookies to give you a better user experience now and to give us enough anonymous user information, to be able to improve the content of our website for you over time. If you continue to browse our website, we'll assume that you are happy to allow us to use cookies for these purposes.

You are here now : Home > History

T C Smith Solicitors was founded in April 1887 by Thomas Cleghorn Smith at the firm’s current address at 9 Church Street, Berwick upon Tweed, which he shared with his father who was the Borough Treasurer.

He took his son Edmund into partnership in 1926 after he returned from the Great War having served in the Royal Artillery.  He was the youngest serving captain in the British Army at the time.  T C assisted by Edmund was largely responsible for drawing up the 1926 Freemen Act which regulates the Berwick Freemens Estate. T C’s youngest son Ivor was admitted to the Partnership in about 1929.

During the Second World War Ivor served in the Royal Navy and Edmund kept the Firm going with the assistance of only one clerk.  After the war and Ivor’s return the two continued in practice in partnership.

John Reay, a local farmer’s son joined the Firm in 1963 after leaving Cambridge and having married Edmund’s daughter Hilary.  He retired in 1996.  John Marshall, another local farmer’s son, came on board in the early 1970’s.

John Marshall retired as a partner on 31st December 2015, and Mark Butson is now senior partner. John continues to assist the firm as a consultant solicitor on a part-time basis. 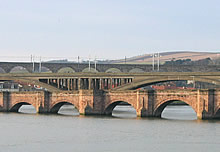